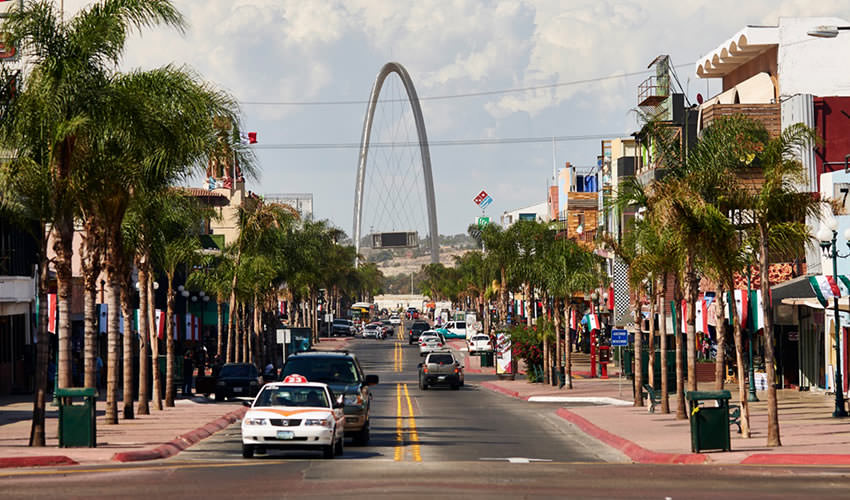 Avenida Revolución (“Revolution Avenue”) is the tourist center in Tijuana, Baja California, México. It is the main thoroughfare of the historic downtown of Tijuana, officially called the Zona Centro, which forms part of the Delegación Centro or Central Borough of Tijuana.

Locally known as “La Revu,” today, it is a kaleidoscope of physical color and holds the secrets from a tawdry past. It is the source of a new life for the city, brimming with cafés, restaurants, hotels, brilliant street murals, designer galleries, and outdoor performances.

Avenida Revolución was the first road in Tijuana to be paved, near the beginning of the twentieth century. Originally called Avenida Olvera, it was from its earliest days a popular destination for American tourists who crossed the border from California.

The Avenida Revolución’s most remarkable development was during the Prohibition Era of 1920-1933 when it was visited by American tourists seeking legal alcohol.

The Caesar salad was invented on Avenida Revolución during this period by Caesar Cardini, the Italian-American proprietor of the Hotel Caesar and its restaurant Caesar’s.

During this period the name of the avenue changed several times in line with political developments in Mexico. In 1920 it became Avenida A. In the late 1920s, it became Avenida Álvaro Obregón and subsequently Avenida Libertad. In 1932 it received its current name.

Avenida Revolución has experienced many changes, and is known as the business card of Tijuana, “The most visited city in the world”. It was known for its famous cantinas including, “La Ballena”, the largest bar in the world when it was open.

The city was popular with American Navy sailors until the United States Navy prohibited sailors from visiting Tijuana.

The long avenue is home to several distinct attractions, from cantinas and table dance bars to numerous dance clubs and art galleries.

A popular tourist attraction is taking a picture with a zonkey, a donkey painted to look like a zebra.

If you’re looking for artisan craft shops, this is the street to explore. Many of the shops along the street stock their shelves with goods produced by Tijuana natives. Think stained glass, leather, and figurines.

You’ll also be able to find Talavera pottery, wooden figurines from Oaxaca, and textiles from the Yucatan.

There is always something to see, hear, smell, or taste along the main artery of the downtown.

Businesses include some remaining handicraft and leather shops, pharmacies catering primarily to Americans, and a branch of the Sanborn’s gift emporium and casual restaurant.

This is also the heart of Tijuana’s culinary revolution. Flanking either side of the Avenue, visitors will find many modern restaurants churning out traditional and experimental dishes from both local and international chefs.

American stores and fast-food restaurants like 7-Eleven and Burger King have a presence on the avenue, as they do throughout Tijuana.