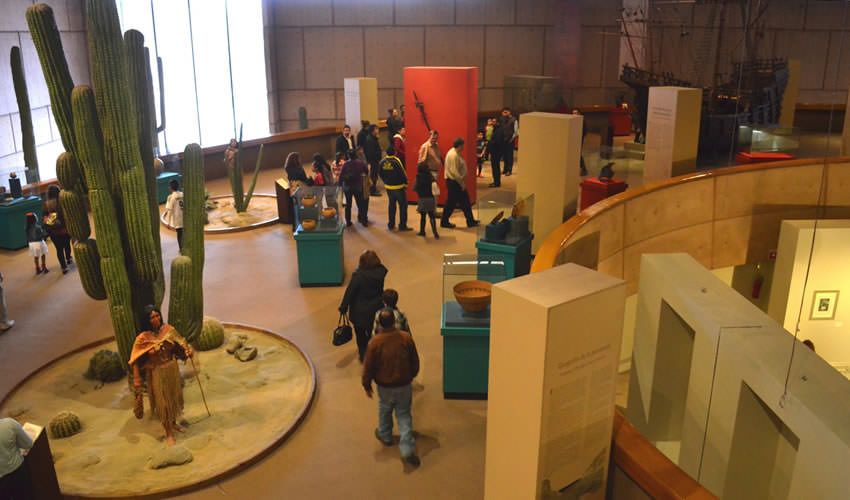 The Museum of the Californias is a museum located within the facilities of the Tijuana Cultural Center, in the city of Tijuana. It is a museum exhibition space made up of a lobby and eight permanent rooms dedicated to different facets of the history of Baja California.

The museum was inaugurated on February 24, 2000, as an extension of the Tijuana Cultural Center. The museography script was in charge of the teacher Mario Vázquez Ruvalcaba.

The objective of the museum is to contribute to the knowledge of peninsular history and generate a space for reflection on the identity of Baja Californians. It houses a collection of more than a thousand pieces (350 on display) representative of regional and national history.

It consists of eight permanent rooms:

It has a temporary exhibition hall, offers guided tours in Spanish and English, dramatized tours, conferences, and calls for a children’s drawing contest and a youth drawing contest for historical compositions.

This room is focused on the first settlers of the Baja California peninsula, especially the indigenous groups that inhabited what are now the territories of the municipalities that make up the federal entity.

This is how we can see vestiges of the Kumiai, Pai Pai, Cucapá, Kiliwas, and Cochimís cultures.

In this room, mention is made of the first explorations carried out after the arrival of Hernán Cortés to the Baja California peninsula.

This is how we see information on the expeditions of Francisco de Ulloa, Juan Rodríguez Cabrillo, Sebastián Vizcaíno and Fray Junípero Serra. In addition, there are scale models of the caravels in which the Spanish made the expeditions.

In this room, there are scale models of the missions built by the Jesuits, Dominicans, and Franciscans during the time they were in the region, respectively. In addition, there is information and a map of the places where these missions were built.

This room covers the time period in which after the expulsion of the missionaries, some sites became ranches and others prisons.

These rancherías were later divided by the US intervention in Mexico, after seizing more than half of the territory, leaving Rancho Tía Juana on the dividing line.

In addition, various local political actors were present in the region, building the first customs, courts, and offices, in a slow process of integration with the rest of the country.

The Mexican Revolution is the historical scenario in which both Mexicali and Tijuana enter history since both cities were taken by the confederation of Liberal Army Groups (“magonistas”), intending to make Baja California a socialist republic.

After the revolution, Baja California began a process of social and political construction, laying the foundations for its consolidation as a free and sovereign entity. The first municipalities that would become the future municipalities of the state are given.

This section is focused on the environmental issues of the state, as well as the natural regions of the state; the endemic flora and fauna of the region.

Museum of the Californias on Google Maps