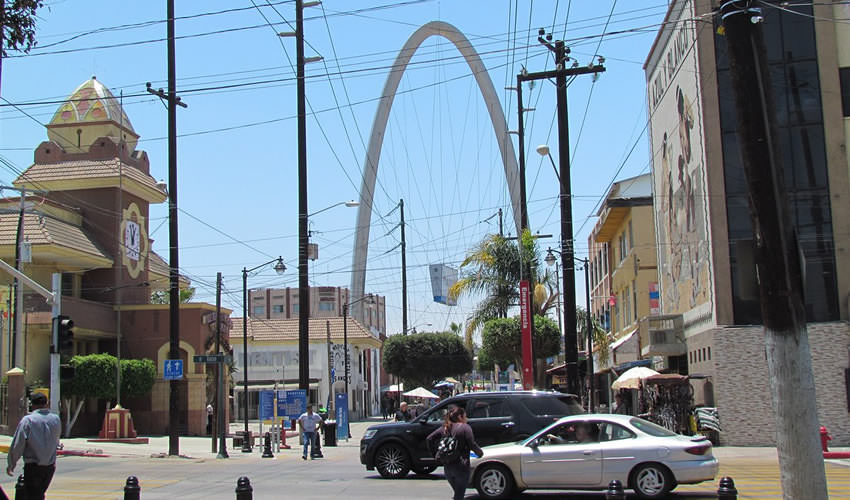 A tall shining metallic arch rises above the busy streets and rolling hills of Tijuana, giving this Mexico’s westernmost city an icon to welcome visitors and symbolize its modernity.

The arch has been controversial since its construction but has also become one of the city’s most important symbols in the 21st Century.

​Measuring 60 meters in height and 33.5 meters wide, the Reloj Monumental is about as tall as a 14-story building, making the metallic arch easily visible throughout Tijuana as well as just across the U.S.-Mexico border in southwestern San Diego County.

The towering arch was built specifically on Avenida Revolución (Tijuana’s most famous street) to welcome tourists.

​The Reloj Monumental was first proposed by Tijuana Mayor Francisco “Kiko” Vega de Lamadrid early in his three-year (1998-2001) term to welcome the new millennium through a revitalization of Avenida Revolución and the city’s historic Plaza Santa Cecilia.

The city council formed a committee of local citizens to determine the project’s design through a contest.

“As the project rises, it will become an architectural symbol for the city and serve as the starting point for an initiative which will reactivate Avenida Revolución, revitalize the Zona Norte district, and strengthen the tourist corridor.”

​The arch project was budgeted at $6,400,000 MXN (about $640,000 USD). Although expensive, the city council supported this project because it would be of great significance for the city of Tijuana.

Many businesses around Avenida Revolución and Plaza Santa Cecilia opposed the project fearing it would damage the historic center’s architectural integrity, as well as the disruption construction, would cause.

​Indeed, the arch was built over Avenida Revolución with its bases built on the northwestern and southeastern corners of its intersection with Calle Primera (Argüello). For much of the day, the arch casts a shadow over the historic Plaza Santa Cecilia.

​Today the Plaza Santa Cecilia hosts various restaurants and shops while also being a favorite gathering place for mariachi musicians.

Harkening back to the city’s early touristic heritage, redevelopment of the plaza has long been a contentious issue for Tijuanenses.

On November 30, 2001, the Reloj Monumental was officially dedicated.

“In The Heart of Tijuana: As a gift from the Tijuanenses to this noble and prosperous city, the ‘Monumental Arch and Clock’ is presented as a symbol of the strength and union of its inhabitants towards the new millennium.”

​The Reloj’s early years were a time of great frustration. While southbound motorists could see a “Welcome to Tijuana” sign suspended between the arch’s legs, the opposite side of the sign included a digital clock comprised of various small TV monitors.

However, it stopped working just a few weeks after its dedication.

​The broken clock (whose interior parts had been stolen) became an eyesore for local merchants. The new Tijuana landmark’s mixed-to-negative reception suggested it might not be part of the city landscape for too long.

In 2011 Via Tijuana described the clock as looking completely forgotten. And in 2014 local merchants finally convinced Mayor to improve the monument’s upkeep as part of an effort to bring tourists back to the border city.

The long-broken digital clock was replaced with a larger outdoor television donated by Samsung as part of the Korean corporation’s 5-year plan to invest $100 million U.S. dollars in the city.

Corporate advertisements have run on the large monitor since it was installed in February 2015.

​Although many Tijuanenses complain the arch is just an extravagant billboard, the arch’s renovation improved the Reloj Monumental’s reputation in the city, with tourism guides highlighting it as a key part of visiting the city.

The arch is now a common reference point Tijuanenses use when giving directions. Just look for the arch if you get lost when entering Tijuana from the San Ysidro border crossing.

​Although its controversial origins, there can be no doubt that nearly twenty years after its debut that the Reloj Monumental has become an essential part of 21st Century Tijuana and its historic Avenida Revolución.