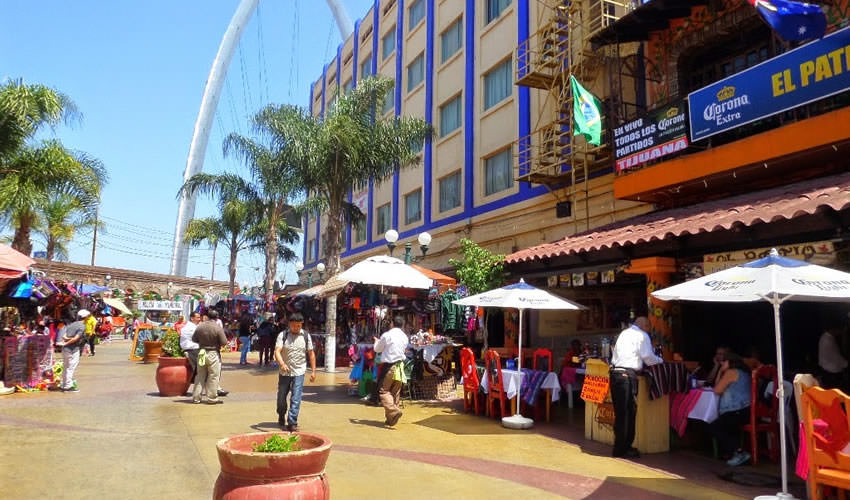 Plaza Santa Cecilia is a cultural space and commercial walkway, located between First and Second streets in the Downtown area of ​​Tijuana, Baja California. Its name is due to the presence of a small statue of Santa Cecilia, the patron saint of musicians, who stand out for their presence in the place.

The plaza, which is actually a diagonal street, was originally known as Callejón or Avenida Argüello and was open to vehicular traffic in both directions. Prior to its commercial and cultural relevance, it served as a station for the tram that came from San Diego during the 1910s. Over the years, various businesses were established in the area promoted by its proximity to Revolution Avenue.

Its inauguration as a Plaza was on November 22, 1980, by the then governor of the State of Baja California, Roberto de la Madrid Romandía, and his wife, Elena Victoria de la Madrid, with the aim of having a tourist site, offering a better image and to publicize “the most precious of our culture and our customs”.

In this way, the square emerged as the Plazuela del Mariachi and, from then on, traffic was only pedestrian.

On September 30, 1983, by regulation of the Municipal President Roberto Andrade Salazar, the operation of the Plaza “Santa Cecilia” Tourist Center was in charge of the Tourism and Conventions Committee of the municipality of Tijuana.

The Committee would make the facilities of the Plaza available to the musical ensembles so that they could expose the national musical folklore to the Mexican and foreign public.

The musical groups of mariachis, dance groups, norteños, drums from Sinaloa, municipal bands, and singers or soloists, would perform during the day or at night.

The Committee would designate a Qualifying Jury to choose the Ensembles that would perform in the Plaza.

In order to make Mexican musical culture visible, the groups chosen to perform at Plaza Santa Cecilia had to meet the following requirements:

The relationship between the musical groups with the City Council and the Committee was restricted to facilitating their services in the Plaza, as well as observing fair rates for the public.

The attempts to regulate and maintain the Plaza did not prevent the early 1990s from finding it full of rubbish, drunken people, dry plants, and a refuge for homeless people, prostitutes, and drug addicts, so at the end of 1999, it was renovated to welcome the new century.

The plaza, nuanced by the presence of bars, canteens, and hotels shares its space with ethnic and cultural, formal, and itinerant commerce, where women of indigenous descent, mainly Mixtecs, who initially offered their products on Avenida Revolution, but which were relocated to Plaza Santa Cecilia, by the municipal government, marginalizing them from the public space they used.

Although the working conditions of these women were not adequate for the sale of their handicrafts, remaining at the will of the tenants for the protection of their products, their presence and work contributed to the improvement of the image of the place and in the tourist attraction.

The Plaza Santa Cecilia was the object of a new renovation in 2002, on the occasion of the CXIII anniversary of the city. The council carried out the work with the aim of offering an improved urban image for tourists.

Among the changes made, the construction of small kiosks stands out where the street vendors were relocated so that they will have a fixed space to store their handicrafts. In addition, the lighting was improved and a greater police presence was sought to guarantee the security of the square.

The musical activity, being the tourist catalyst of the place, has remained the main attraction, therefore, an esplanade was built for the musical offer.


Travel and discover Puebla City, the capital of the state of Puebla and the fourth-largest city in Mexico. Puebla is a colonial and one of the oldest cities in Mexico. Here you can find all tourist and historical information about Puebla City, places of interest, suggested excursions and recommended routes, and much more.