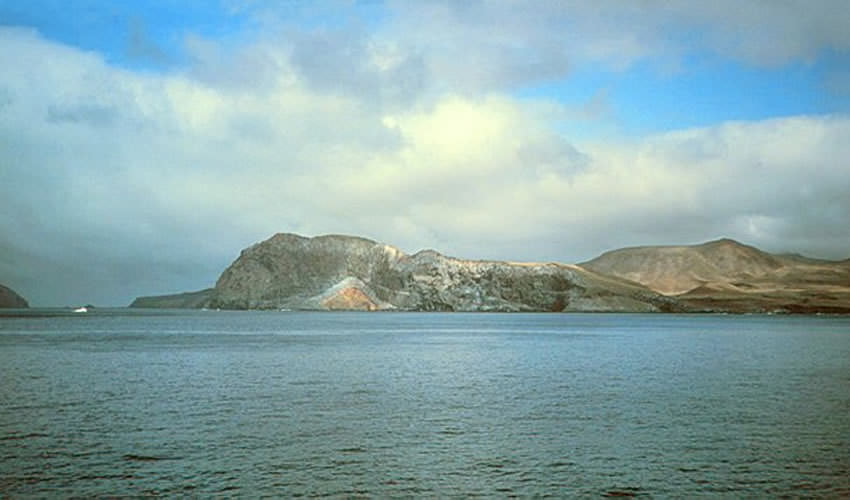 Guadalupe Island or Isla Guadalupe is a volcanic island located 241 kilometers off the west coast of Mexico’s Baja California Peninsula and about 400 km southwest of the city of Ensenada in the state of Baja California, in the Pacific Ocean.

The various volcanoes are extinct or dormant.

In 2005 Guadalupe Island and its surrounding waters and islets were declared a biosphere reserve to restore its vegetation (decimated by goats) and to protect its population of marine mammals and birds.

The island is a popular destination for white shark cage diving.

Guadalupe Island is inhabited only by scientists, military personnel operating a weather station, and a small group of seasonal fishermen. The island is mostly arid and has very little surface water.

The two other Mexican island groups in the Pacific Ocean that are not on the continental shelf are the Revillagigedo Islands and Rocas Alijos. Guadalupe Island and its islets are the westernmost regions of Mexico.

The 2010 census recorded a population of 213 people on the island. In 2015, it was estimated to have fewer than 150 permanent residents.

Guadalupe is part of the Ensenada delegación, one of the 24 delegaciones (“subdivisions”) of Ensenada Municipality of the Mexican state of Baja California.

Ensenada delegación and Chapultepec delegación together form the city of Ensenada, the municipal seat of the namesake municipality. The postal code of Guadalupe Island is 22997.

Campo Oeste (“West Camp”, also called Campo Tepeyac, with 15 buildings) is a small community of abalone and lobster fishermen, located on the western coast, specifically on the north side of West Anchorage, a bay that provides protection from the strong winds and swells that whip the islands during winter.

The number of fishermen varies annually depending on the fishing season. Ten months of the year the 30 families of the fishing cooperative “Abuloneros and Langosteros of Guadalupe Island” are present.

At the southern tip, on Melpómene Cove, there is a weather station staffed by a detachment from the Mexican Ministry of the Navy. he site is called Campamento Sur (“South Encampment”).

Campo Bosque was established as a temporary camp in 1999 in the cypress forest in the north. The camp houses members of the Cooperative Farming Society “Francisco Javier Maytorena, S.C. of R.L.” and removes goats from the island and sells them in the State of Sonora, with permission of the Secretariat of the Environment and Natural Resources (SEMARNAT) and the support of the Secretariat of the Navy.

Campo Pista is located at the small airport, near the center of the island.

Airport Isla Guadalupe (ICAO Code MMGD) has a 1,200-metre-long runway. At the end of the runway near threshold 5 is the wreckage of a Lockheed Model 18 Lodestar, which overshot the runway during landing.

A North American bomber wrecked on the opposite end of the runway, after suffering serious damage in trying to take off overloaded. Based on historical Google Earth imagery, this wreckage appears to have been removed from the location between October 2005, and June 2006.

Because Guadalupe Island is located within a biosphere reserve, anyone visiting the island must obtain a permit from the Mexican government; this means the communities on the island are closed towns.

Guadalupe Island has a rugged landscape composed of two shield volcanoes that formed on a now extinct mid-ocean ridge. They are overlain by lava flows and cinder cones that were emplaced along northwest-southeast and northeast-southwest trending fissure vents.

The youngest shield volcano comprises the northern end of the island and may have formed during the Holocene epoch.

A series of very fresh-looking alkali basalt flows along with trachyte domes in the northern shield volcano caldera represent the most recently formed rocks on Guadalupe Island.

The island measures 35 kilometers north-south and up to 9.5 kilometers east-west, with a total area of 243.988 sq km. It features a chain of high volcanic mountain ridges that rises to a height of 1,298 meters at its northern end (Mount Augusta).

Its smaller counterpart on the southern end is the 975 meters El Picacho.

The coast generally consists of rocky bluffs with detached rocks fronting some of them. Two high and prominent islets are within three kilometers of the southwestern end of the island, separated from one another by a gap called Tuna Alley:

Elsewhere, the other islets are very small and close to the shore, all less than one kilometer away:

Most precipitation occurs over the winter months with a strong influence of northwestern winds and cyclones.

Rainfall averages 133 millimeters near sea level at the south end but appears to be much more at the high north end.

An estimate for the rainfall in the northern highlands is possible by way of taking Pinus radiata as an indicator, which is native to that area of the island.

In other places where Pinus radiata is native, it grows best with about 750 millimeters of rainfall but under some conditions can survive with as little as half that much. The effective moisture is much greater because of fog drip.

Guadalupe Island was a major destination for Russian and American fur hunters seeking the Guadalupe fur seal in the 18th and 19th centuries until they were nearly extinct by 1844.

Captain Auguste Duhaut-Cilly reported in 1827 that a Sandwich Islands (Hawaiian Islands) brig “had spent several months there and collected three thousand sealskins”. The northern elephant seal was also ruthlessly hunted for the oil in its blubber.

They were thought to be extinct in 1884 until a remnant population of eight individuals was discovered on Guadalupe Island in 1892 by a Smithsonian expedition, who promptly killed several of them for their collections. The elephant seals managed to survive and was finally protected by the Mexican government in 1922.

Guadalupe shares the California chaparral and woodlands ecoregion with the Channel Islands of California in the United States, but the island was at one time practically denuded of all plants higher than a few centimeters by up to 100,000 feral goats.

Originally brought there in the 19th century by European whalers and sealers for provisions when stopping over, the population eventually eliminated most vegetation; the number of goats declined to a few thousand. Before this collapse, the main impact of the goat population was about the turn of the 19th/20th century.

The island had been a nature conservancy area since August 16, 1928, making it one of the oldest reserves in Mexico. Eradication of the goats was long envisioned, but logistical difficulties such as island size and lack of suitable spots for landing and encamping hunters and material prevented this.

Guadalupe Island was designated a biosphere reserve on April 25, 2005.

French sea captain Auguste Duhaut-Cilly remarked on the tall trees on the north of Guadalupe Island as he sailed past on January 2, 1827.

Of the large tree species on Guadalupe Island (Guadalupe palm, Guadalupe cypress, island oak, and Guadalupe pine), there were only old individuals left; the California juniper had entirely disappeared.

As the goats ate any seedlings that managed to germinate, no regeneration of trees was possible. Water, formerly plentiful as the common fogs condensed in the forests of the northern end of the island, today only occurs in a few scattered pools and springs.

Because the springs were a critical emergency water supply for the human inhabitants, protective measures including goat fences were installed beginning in 2000, allowing new seedlings of many species to survive for the first time in 150 years.

Seacology, a non-profit environmental group located in Berkeley, CA, provided funding to the Island Conservation & Ecology Group for the construction of ten fenced enclosures to keep goats out of the most sensitive areas of Guadalupe Island.

In November 1850, U.S. Army Lt. George H. Derby passed the island on his expedition in the U.S. Transport Invincible. He described it thus:

“This island is about 15 miles in length and 5 in width. It is rocky + mountainous but capped with vegetation and is reputed to be thickly inhabited by wild goats of unusual size.

Water is found upon the eastern shore and the Island is frequently visited by small vessels engaged in the capture of the sea elephant numbers of which animals are found upon its coast.”

Many islands or marine species that reside on or near Guadalupe also frequent the Channel Islands, and vice versa. In stark contrast to the rampant extinction of terrestrial life that happened at the same time, Guadalupe was the last refuge for the northern elephant seal and the Guadalupe fur seal in the 1890s.

The island has been a pinniped sanctuary since 1975.

The movement of the cool, nutrient-rich water current promotes phytoplankton production and attracts both coastal and deep-water species, including great white sharks.

Guadalupe is considered one of the best spots in the world for sightings of the great white shark, possibly because of its large population of pinnipeds. The island has been recognized as an Important Bird Area (IBA) by BirdLife International.

Most of the tourists who visit Guadalupe Island come by boat for shark cage diving to see the great white shark in its habitat.

More than 300 great white sharks are known to frequent the clear waters of Guadalupe, mostly on the northeastern coast.

Male sharks arrive at the island in July and females in September and they remain near the island until February when they migrate about 1,600 kilometers westward to the White Shark Café in the Pacific Ocean between Guadalupe Island and Hawaii, making the journey in about 16 days.

The White Shark Café is a remote mid-Pacific Ocean area noted as a winter and spring habitat of otherwise coastal great white sharks. The area, halfway between Baja California and Hawaii, received its unofficial name in 2002 from researchers who were studying great white sharks by using satellite tracking tags.